At the time, I recall feeling just happy and mindless, unworried, flowing along with whatever was required of me. I did what I was supposed to do: an obedient, observant and somewhat melancholic child….

Infrequently, but always according to some Always Wrong drunkard’s timetable, Lank Elliott, GrandMomma Elliott’s last child–the one truly ever-lost dark person of that family–the confirmed bachelor–eased his Fairlane through the weeds to an abrupt halt before the ancient house of his father. 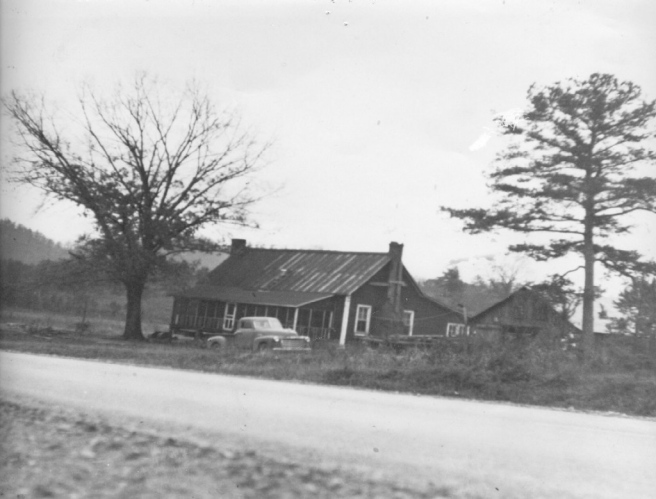 Of course, we kids were hiding behind clumps of trees or in ditches, playing at first but then seriously spying on him; we’d watch as he flicked his cigarette into the weeds, slowly got out, stretched, rearranged his pockets, spit, and rolled his neck around for comfort with that all-too-bland, impenetrable manner he had. He might then reach back into the car for his deck of cards, and only then sidle up toward the steps, his hair glistening with smelly Vitalis, his spotless white shirt catching late light. This croupy cough grumbled out before you heard “Momma? Diddy? Anybody home?” and then the sound of a wooden screen door thumping open and shut. Low greetings.

As a young English-major-to-be, I came to see how his nicknamed had been configured from the words blank, dank, and slink. Humored by everyone, cut acres of slack, Lank never stumbled around or babbled or otherwise evinced any outward signs of inebriation, even when he most certainly was. Other relatives noted this for us. Still, the smell of transmuted beer–unknown to kid noses–seeped out of the edges of his clothes.

Later on, slightly older, I was in on some Hearts games and got to know him a very little bit better. He had the odd manner, a hang-dog manner, rarely smiled, almost never spoke unless asked a direct question, and seemed to be most suited to the thick, wide eyebrows of most of his Elliott kinsmen.

It was not the only unexplained nickname we had to suss out. The adults were always ultra-careful, quick to hush us or each other when we came close to the answers.

His death? Ignominious, near Alexander City, in a small trailer. A very hot day.